SIGNS IN THE HEAVENS

​This page is dedicated to show the various Signs in the Heavens that occurred within these last several years... pointing out to us that our redemption draws near. Look up! The signs say the Rapture of the Church is soon upon us.

​
​Genesis 1:14
"And God said, “Let there be LIGHTS in the expanse of the heavens to separate the day from the night. And let them be FOR SIGNS and for seasons, and for days and years"


The Sun and the Moon were created on the 4th day of Creation. The first purpose given for them, is that they are for "SIGNS."
God's way to communicate with man. And Luke 21:25-28 tells us that before the Rapture takes place, there will be "SIGNS" in the Sun and Moon and Stars.

​
Luke 21:25-28 The Coming of the Son of Man
“And there will be SIGNS in SUN and MOON and STARS, and on the earth distress of nations in perplexity because of the roaring of the sea and the waves, people fainting with fear and with foreboding of what is coming on the world. For the powers of the heavens will be shaken. And then they will see the Son of Man coming in a cloud with power and great glory. Now when these things begin to take place, straighten up and raise your heads, because your redemption is drawing near.”


ABOUT THE PAST: Using technology Scientists now have the ability to track all celestial signs throughout history, going back thousands of years into the past. What they have documented confirms biblical recorded accounts, such as: "Bethlehem Star" alignment, solar eclipses, lunar eclipses, etc., within the timing referenced in scripture. Using space software you can research this yourself, or you can find videos available of others who have already done the research to share.

​ABOUT RIGHT NOW: There has been recent "rare" celestial signs occurring consistently are catching the attention of many Christians. However there is more to it! There is no scientific explanation for the accuracy of them. Almost every one of these events occurred on Jewish Feast Days & minor feast days. There is pattern being revealed in the exact timing of these recent Heavenly signs..... that cannot be overlooked or dismissed as chance.... we know the truth...

Psalm 19:1 - "The heavens declare the glory of God; the skies proclaim the work of His hands." 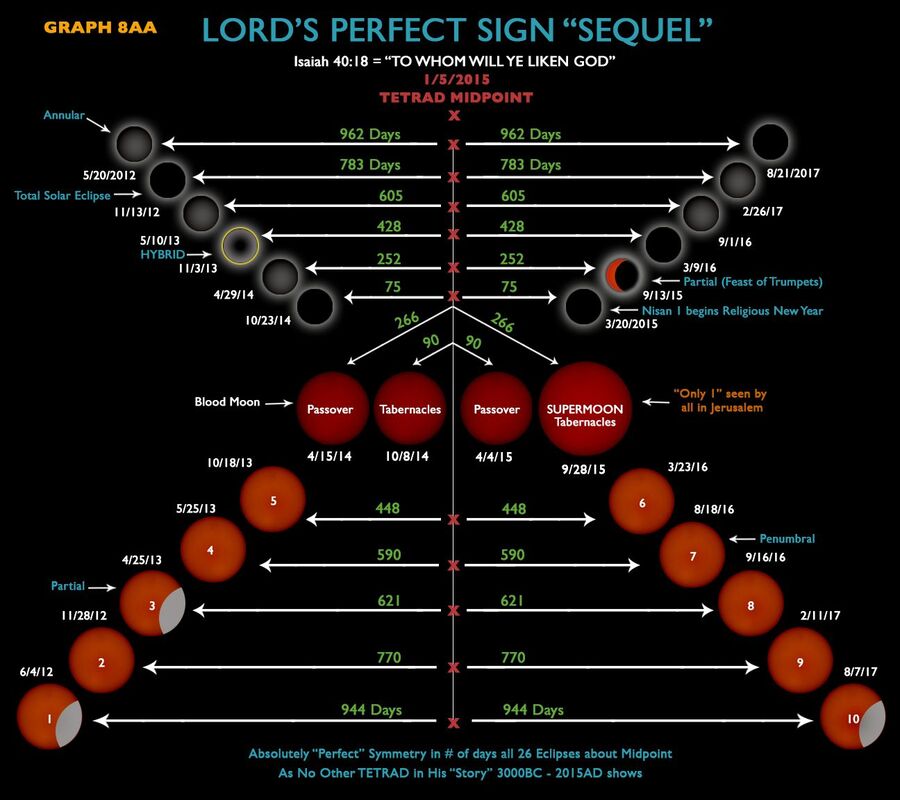 Super Blood Moon - January 20/21, 2019
​​
For the first time in three years, the United States will be able to experience a total lunar eclipse. Each month's Full Moon is called something different, and January's is a "Wolf Moon." This month's full Moon is also a Super Moon, when the moon is closer than usual to the earth. It's also a Blood Moon, or a total lunar eclipse. It will occur during the Midnight hour between January 20 - January 21, 2019....and is being known as the “Super Blood Wolf Moon Eclipse.”  It will be seen by people in North America, South America, Greenland, Iceland, and more. The next time you'll be able to see this rare occurrence will be in 2036.​ This Lunar Eclipse also happen to be on the Jewish Minor Feast Day, "Tu B'Shevat".

** NOTICE ** on the Lord's Perfect Sign Chart above....this is the LAST event to take place before completing the whole mirror-image picture of the amazing alignment of the Signs in the Heavens! (See bottom, right side). The Heavens Declare His Glory!!

Longest Blood Moon of 21st Century - July 27, 2018
​​
A Total Lunar Eclipse will occur on July 27, 2018. It will be the longest eclipse to grace the skies for the next 82 years. It won't be visible from North America, however the entire eclipse will be visible from Africa, the Middle East and countries in central Asia. Considering that 2018 is the year of Israel's 70th year anniversary, this is an important biblical sign marker. The time of greatest eclipse will be 4:21 p.m. EDT (2021 GMT) on July 27, according to EarthSky.org. The total eclipse will last from 3:30 p.m. to 5:13 p.m. EDT (1930 to 2113 GMT). There will also be some time before and after when the moon is in the lighter part of Earth's shadow, which is called the penumbra. Including that penumbral time, the eclipse will last will last nearly 4 hours, making it the longest Blood Moon of the 21st Century. Another rare sign marking the times. This day also happens to be Jewish minor Feast Day, Tu' B Av.
​Please see the videos below for more information. ​

Super/ Blue/ Blood Moon - January 31, 2018
​​
A Super Moon is when the a full moon appears larger than usual... because it's path coincides with the moon’s closest point to Earth.
A Blue Moon is the second Full Moon within one month. A Blood Moon is a lunar eclipse. On January 31, 2018 the Moon was ALL 3 of these at the same time. This has not happened in more than 150 years. Another rare sign marking the times. This day happens to be Jewish Feast Day, Tu' B Shevat. Please see the videos below for more information.

Among the many other increasing signs of Jesus coming that are being seen all around us, there is a very specific marker in the Heavens described in scripture... that came into alignment September 23, 2017. This day happens to be Jewish Feast Day, Rosh Hashanah. Not a coincidence as many of the celestial signs have appeared on Jewish appointed times. Luke 21:25 says there will be signs in the Sun, Moon, and Stars. This sign incorporates all 3. Because of the knowledge we have from Planetarium Software programs, information is available to confirm the very specific alignment of the Sun, the Moon, and the Stars... forming the Revelation 12 Sign. The Woman giving birth & the Dragon. This alignment has never happened before and will not happen again!

Many people are already aware of this Rev 12 Sign that aligned on September 23, 2017. Research this and you will find many sources of information on it. However there are many different views about how to use it as a gauge. So I am providing information here to make you AWARE of this sign. This is the most specific Sign in the Heavens described in the bible, and certainly a marker to announce we are indeed living in the last days! Rejoice Jesus is coming soon!!

​
Revelation Chapter 12
"A great sign appeared in heaven: a woman clothed with the sun, with the moon under her feet and a crown of twelve stars on her head. 2 She was pregnant and cried out in pain as she was about to give birth. 3 Then another sign appeared in heaven: an enormous red dragon with seven heads and ten horns and seven crowns on its heads. 4 Its tail swept a third of the stars out of the sky and flung them to the earth. The dragon stood in front of the woman who was about to give birth, so that it might devour her child the moment he was born. 5 She gave birth to a son, a male child, who “will rule all the nations with an iron scepter.” And her child was snatched up to God and to his throne. 6 The woman fled into the wilderness to a place prepared for her by God, where she might be taken care of for 1,260 days. 7 Then war broke out in heaven. Michael and his angels fought against the dragon, and the dragon and his angels fought back. 8 But he was not strong enough, and they lost their place in heaven. 9 The great dragon was hurled down—that ancient serpent called the devil, or Satan, who leads the whole world astray. He was hurled to the earth, and his angels with him. 10 Then I heard a loud voice in heaven say: “Now have come the salvation and the power and the kingdom of our God, and the authority of his Messiah. For the accuser of our brothers and sisters, who accuses them before our God day and night, has been hurled down. 11 They triumphed over him by the blood of the Lamb and by the word of their testimony; they did not love their lives so much as to shrink from death. 12 Therefore rejoice, you heavens and you who dwell in them! But woe to the earth and the sea, because the devil has gone down to you! He is filled with fury, because he knows that his time is short.” 13 When the dragon saw that he had been hurled to the earth, he pursued the woman who had given birth to the male child. 14 The woman was given the two wings of a great eagle, so that she might fly to the place prepared for her in the wilderness, where she would be taken care of for a time, times and half a time, out of the serpent’s reach. 15 Then from his mouth the serpent spewed water like a river, to overtake the woman and sweep her away with the torrent. 16 But the earth helped the woman by opening its mouth and swallowing the river that the dragon had spewed out of his mouth. 17 Then the dragon was enraged at the woman and went off to wage war against the rest of her offspring—those who keep God’s commands and hold fast their testimony about Jesus."
​

A Total Solar Eclipse appeared directly across the United States on August 21, 2017. There are many specifics about this eclipse that make it impossible to believe were just coincidence, but instead... could only be divinely orchestrated by God to make this sign even more important. Please see the video below for more information.